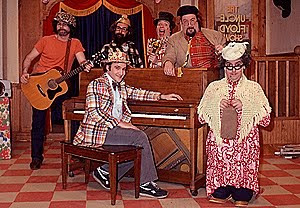 The Vivino family is a big name in show business. Guitarist, Jimmy Vivino, is an amazing guitar player who has helmed the Max Weinberg 7 since the beginning of Conan O'Brien's late night career. His brother Jerry is the saxophonist of the group. Both of the brothers have played with some serious names over the years and have done tons of sessions.You probably have recordings with them on it and don't even know it. I once heard that the Vivino brothers "owned" the New York music scene. Besides Jimmy and Jerry, there is another brother in show business. He is also a musician as well as an accomplished actor. His most famous film role was that of disc jockey, Eddie Kirk in "Good Morning Vietnam". However, millions of faithful television viewers in the tri-state area of New York, New Jersey and Connecticut, he is better known for his starring role in the cult hit, "The Uncle Floyd Show". For those of you who don't know, The Uncle Floyd Show aired in the New Jersey and New York market from 1974 to 1998. It was touted as a children's show but it soon became apparent that it was more of a parody of a children's show. Much of the humor had a twist aimed at adults in the style of Soupy Sales and Pee Wee Herman. The show featured slapstick comedy, puppetry, some audience participation, and piano music. Floyd's puppet sidekick was named Oogie. The first cast members were Pat Cupo and Bob D. Caterino. Later members were Scott Gordon , Craig "Mugsy" Calam, "Netto", Jim Monaco, "Looney" Skip Rooney, Charlie Stoddard and Artie Delmar. I remember coming across this odd show at my grandparents house. At the time, they had cable TV and we did not. Whenever I was at their house (which was a lot) I waited patiently for the show to come on and then would watch in awe. I was pretty sure I was watching a television revolution. My father and grandfather watched it with a few times and were laughing at a lot of the stuff I was but also at other parts that I wasn't sure why. One of my favorite parts of the show was when the cast would start breaking up and laughing at the bits that they were doing. Add to this, a roster of celebrity guests and you have the recipe for classic television viewing. There is a video compilation that was released on DVD a few years back that I have been meaning to purchase. Until then, I will have to settle for these video files from The Uncle Floyd Show!!!


(I originally had the long out of print Uncle Floyd Album up for sharing here but there were some complaints from people involved with the Uncle Floyd Show so I took it down. The World of Wonder does not intend to upset anyone so that's why I took it down.)
Posted by Dartman at 11:21 PM

Since you've shared some nice "space disco" tracks, I wanted to forward a few songs from the following Enoch Light album which have not appeared on any blog. If you wish, please feel free to post some or all of them on your blog. (Of course, some are just faithful covers of the most famous disco-related film.)

- Theme from Close Encounters of the Third Kind - John Williams (1977)

I hope that you enjoy these songs. Thanks for all your shares.

Thanks for the link, Chricton. I'm not a huge Enoch Light fan but I may will certainly keep this link in the comments section for anyone who wishes to download it. Thanks. BTW, I don't know when you sent the original comment but I just received both of yours today at 6:00 PM. Apparently, blogger was having some issues.

when i was 7 years old, I drew 2 pictures and sent them to uncle floyds show and they were both featured! I felt like such a celebrity at school!