More Fun With Ken and David 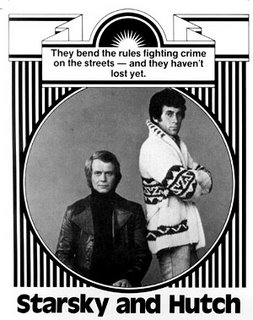 Continuing with more Starsky and Hutch goodies, I bring you a blooper reel from the series. This is not the blooper segment that is included as a bonus feature on the Season One DVD Box Set. This is actually an old blooper reel that the producers made for the show to give out to various sponsors and other big shots. This used to be a tradition in the TV world. When the video revolution hit, these "gag" reels found their way into the hands of various collectors. And, as with most bootleg material, was copied and copied and copied and copied thus providing several different generations of the original footage. I have no idea what generation this is but I do know that it is not the first. But none-the-less, it is worth seeing. One last note - this is not family fare!

Posted by Dartman at 9:45 PM No comments: