The Best of The World of Wonder: The Guy They Call Little Mickey Mouse 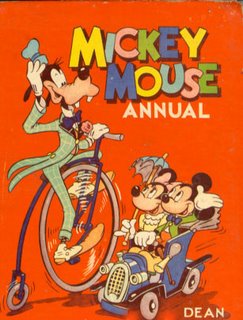 The Mouse Factory was a television show in the early seventies that would feature all different clips from all different Disney cartoons. This was long before the advent of cable so it really was the only place that you could see Disney cartoons. The show did so well that they released this accompanying record. It is one of my all time favorites! It never fails to bring a smile to my face. It features great songs such as "Minnie's Yoo-Hoo" and The 4 Mosquiteers singing "The Ballad of Davy Crocket". However, the best bits are the little skits that involve Goofy, Donald Duck, Uncle Scrooge and others. I still have my copy from my childhood but recently aqquired a brand new never-been-opened copy which I played for the first time for this post. Enjoy!

The Mouse Factory
Posted by Dartman at 3:35 AM 1 comment:

A "behind the scenes" look at the "Hungry Like The Wolf" commercial followed by the actual commercial!

Last week I had the pleasure of reminiscing with a few old friends from my college days and we got to talking about drive-in theaters and it brought back a flood of memories of going to the drive-in with my family back when the drive-in was a major part of film going. Nowadays, the old Clinton Drive-In is a Super Stop and Shop complete with accompanying little stores in a strip mall. In fact, it was only about a few years ago that they found the screen in the field behind the store. Anyway, I saw a lot of great movies that would leave lasting impressions there. Escape To Witch Mountain, Logan's Run (those were both shown on the same bill!) and who could forget, Pete's Dragon. Since that fateful viewing on the big drive-in screen, Pete's Dragon has played a weird part of my life, popping up in various different times throughout. I remember viewing it on television at my grandparent's house when they had just gotten this new cable channel called HBO. Then I remember viewing it when my family first got cable and we had this brand new exciting channel (that you had to pay extra for at the time) called the Disney Channel. Now that I'm married, I have discovered that it's one of my wife's favorite films and, of course, we own it. She has tried several times to show it to my niece and nephew so that they can share the joy of Pete's Dragon. However, it wasn't until recently that she was able to have them watch it all the way through due the fact that it used to scare my niece. In fact, at school one day, when her 1st grade school teacher asked my niece why she was scared at one point, my niece told her that her aunt had shown her a scary movie. When the teacher asked my sister what kind of film it could be, my sister laughed and told her it was Pete's Dragon and that my niece used to be scared but now thoroughly enjoys it! Anyway, I present for you now, the soundtrack to this "scary" adventure of a boy and his dragon. Interesting bit of trivia about the film, its original theatrical release ran 134 minutes. Shortly after, the film was re-edited to 121 minutes. When it was first issued on home video as a rental title (the first Disney film to be released on home video), the movie was cut again to 104 minutes, severely edited and time-compressed, eliminating the "Candle On The Water" number. When it was made available for sale in October 1980, the film was restored considerably to 128 minutes—the most notable change being an alternate version of the musical number "I Saw A Dragon", different from the one that was seen in the premiere version—this has become the version most widely seen today on video and DVD. For its 1984 theatrical re-release, the film was further cut to 101 minutes, and finally the network television version was cut down to just 94 minutes. Here is the soundtrack (including both Candle on The Water and I Saw A Dragon) for you now. Enjoy!

The Coolest Action Figure Ever!

I think you all will agree!

Here was the female version for the girls: