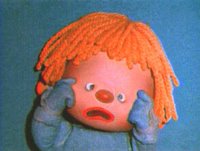 As a kid, I spent a lot of time watching the budding children's cable network known as Nickelodeon. In its early days, Nickelodeon was made up mostly of an all day program called "Pinwheel". It was kind of like cable's answer to Sesame Street. Or to be more exact, Canada's answer to Sesame Street. One of the best segments of Pinwheel was a French claymation show about a boy and a girl in a world of all different shapes. It was only a few months ago that I actually learned that the name of the show was "Chapi Chapo" and was in French. As a kid I just thought it was gibberish. Now I know. And knowing is half the battle.

One final note - In seeing pictures and vid clips from the show today, I realize that Chapi and Chapo look a lot like my neice and nephew. Here are the opening credits to Chapi Chapo.