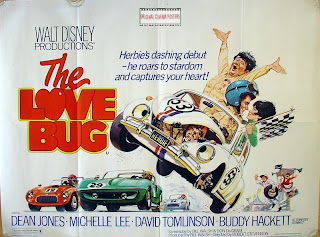 Continuing with my "love" theme for February, today we have another great soundtrack story album. This time around it's Disney's "The Love Bug". Not that Lindsey Lohan remake but the all american original with Dean Jones and Buddy Hackett. As a kid, I remember the Love Bug was always being advertised whether it was for a release of a new film, a re-release of an older one or a television showing. It seemed like the Love Bug was constantly being promoted. Remember, this was back in the late 70s/early 80s and things were much different. When a movie premiered on network television, it was a big deal. Not like today, where a film that was out 6 months ago suddenly shows up on TBS at 2 in the afternoon. Back then, cable was just coming into its own and the big networks were ABC, CBS and NBC. The movies would be shown either as a Sunday Night Movie or in the case of The Love Bug series, they would premiere on Sunday night's "The Wonderful World of Disney". This was before home video was king and if you didn't catch it when it was on, you would have to wait a long time to try to see it again. To help have the film in your head, the film companies would release the film on an LP. It was an edited version of course and it usually had a narrator to tell you what was happening since you couldn't visually see that. These story records proved to be more and more popular. I have posted many on this site before including the original Star Wars trilogy, Raiders of the Lost Ark, Tron and more. Today, I bring you Buddy Hackett narrating the story of "The Love Bug", complete with the original cast. Enjoy!

Classic TV Episode of The Month: The A-Team

Today I found out that the wonderful actress playing "Christmas Eve" on the Avenue Q tour is the daughter of the late Hollywood legend, Mako. For those of you who aren't aware of who he is, here's a brief bio from IMDB:

Born in Japan, Mako was living there with his grandparents while his parents studied art in the United States, when Japan and the U.S. went to war in 1941. His parents remained in the U.S., working for the Office of War Information, and, at the cessation of the conflict, were granted U.S. residency by Congress. Mako joined his parents in New York and studied architecture. He entered the U.S. Army in the early 1950s and acted in shows for military personnel, discovering a talent and love for the theatre. He abandoned his plans to become an architect and instead enrolled at the famed Pasadena Community Playhouse in California. Following his studies there, he appeared in many stage productions and on television. In 1966, he won an Academy Award nomination as Best Supporting Actor for his first film role, as the coolie Po-Han in The Sand Pebbles (1966). Only occasionally since have his roles reached the level of his talents, but he has worked steadily in feature films ever since. He appeared on Broadway in the leading role in Stephen Sondheim's "Pacific Overtures" and he co-founded and served as artistic director for the highly-acclaimed East-West Players theatre company in Los Angeles. After a long battle and illness from cancer, he passed away on the twenty first of July in 2006, at the age of 72. He was survived by his wife, Shizuko Hoshi, who co-starred in episodes of "M*A*S*H" (1972), as well, and his children and grand-children.

Here is an episode of the A-Team featuring my friend Sala's father, Mako. Enjoy!