I was looking for clips of the movie "Arthur" on youtube and discovered this little clip of Dudley Moore singing the song "Jump" from the Derek and Clive Live LP. This is one of my favorite things in the world. Not for the kiddies! Enjoy!

Posted by Dartman at 9:45 AM No comments:

Doomsday Is Upon Us 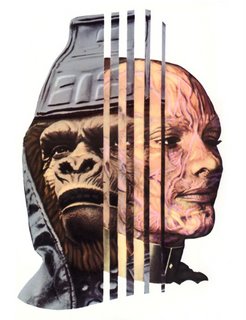 In 1970, 20th Century Fox tried to recreate their success with "The Planet of The Apes" by releasing the 2nd film in what would become a gigantic series of films, television shows, cartoons, books, terrible reimaginings, etc . . . When the film was released, the soundtrack album featuring composer Leonard Rosenman's score was released as well. However, the music on the album differed greatly from the music that appeared in the film. This was because Rosenman was asked to rearrange his score for a smaller orchestra and add contemporary elements including electric guitar performances and rock percussion. Leavening these stylistic departures from his original score were several dialogue sequences from the film, a hugely popular technique that continues to modern day. The original score was eventually released on CD a few years back, but this is the original album that came out in 1970. Enjoy!

Beneath The Planet of The Apes OST
Posted by Dartman at 8:52 AM 2 comments: