Live From The World of Wonder . . . It's Saturday Night! 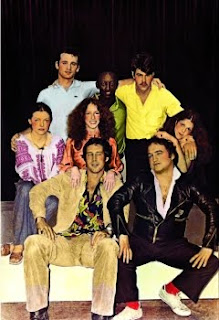 I've been watching the second season of Saturday Night Live all month and am thoroughly enjoying it. In my opinion, the show was never as cutting edge or as daring as in the first five years. It did go through a Renaissance in the 90s that brought the funny back to SNL but it still was not as good as the original Not Ready For Prime Time Players. During the second season, the money machine kicked into gear and the powers that be released a comedy album featuring bits from the first year the show was on the air. I originally had planned to put together more volumes of this idea but just have not had the time. I will do my best to try and do that in the future. For now you can enjoy this great comedy album. Here's "Saturday Night Live: The Album". Enjoy!

Saturday Night Live
Posted by Dartman at 10:17 AM

MUCH THANKS!!! I have been looking for this while many moons now :-)

Strangely, late last year I asked Vinnie Rattolle if he had this and he said he did but that he couldn't post it until later in the month. But that never happened but I waited patiently when he could.

But now my wait is over!

And it's the original release. Yep, there are 2 versions of this recording. If I understand correctly the re-release on CD edits out the coca cola references.

I actually have this on cassette but it's somewhere packed away.

OMG, this takes me back to the good old days of SNL when it was worth staying up late to watch it!!!!! It's still hilarious![: Thanks a lot, Dartman!!

Just checked it and it works fine. Try it again.