The King Takes Over Stax 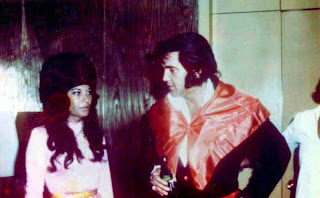 In July of 1973, Elvis and his entourage entered the famed Stax Studios in his hometown of Memphis and proceeded to record. However, it would take a while to get the recording done. It all started on a Monday night. The first thing Elvis requested was that nothing happen until the end of Monday Night Football, a Monday night tradition he shared with the Memphis Mafia. When it was discovered that there were no televisions big enough for everyone to view it on, someone was sent out to buy the biggest tv they could find to watch the game on. When the "viewing party" was over, that's when the guys entered the studio only to be paused again when Elvis declared that the lights were too bright and needed to be changed to softer, colored bulbs. When that was done, the band and Elvis realized that the colored bulbs made it too dark to read the charts so the original bulbs were replaced. Then, and only then, did the recording session convene. An interesting fact about the recordings done at Stax: while the songs were recorded at the Stax studio, the actual recording equipment was the RCA Mobile Recording unit which was in a truck parked in the parking lot of the studio. Among the great tracks recorded at Stax are "Talking About The Good Times" and the classic version of Chuck Berry's "Promised Land". Here are a bunch of out takes from those sessions. Here is "Good Times In The Promised Land". Enjoy!

Elvis Presley- Good Times In The Promised Land
Posted by Dartman at 9:26 AM