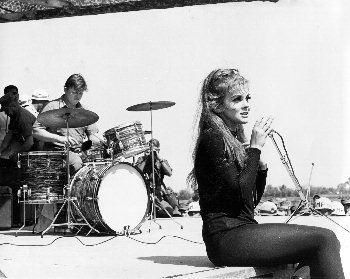 On April 9, 1962, at the annual Academy Awards ceremony, a 20-year-old Ann-Margaret earned a standing ovation for her performance of the title song to the Bob Hope film, "Bachelor in Paradise". However, it would take RCA Records a whole year to release that song. The Ann-Margret of Bachelors' Paradise was very different from the one who had hit the Top 20 with the bluesy "I Just Don't Understand" less than two years earlier. This was a nightclub chanteuse working with an orchestra and performing a bunch of pop standards written by the likes of Rodgers & Hart and Stephen Sondheim. A more mature, debonair sounding Ann Margaret. It suited her well but this image was not too last. Her next project: "Bye Bye Birdie". Oh well. Here is that great album from 1963. Here is Ann Margaret with "Bachelor's Paradise".