A Tribute To The Man Who Did The Mouse 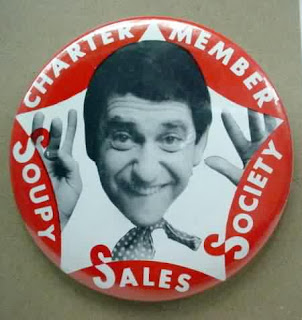 In case you didn't hear about it. the legendary Soupy Sales passed on last month. I didn't really get a chance to give him his just due as I was in the middle of the Halloween countdown and a Soupy post just didn't fit. So, today I offer you Soupy's first album. It's a soundtrack of sorts but more of a companion album to his television show. The show originated in 1953 from the studios of WXYZ-TV in Detroit. Beginning in October 1959, it was picked up by the ABC television network and broadcast nation wide. Back then it was known as "Lunch With Soupy Sales". What a lot of people don't know is that while the children's show was on during the day, there was a late night show called "Soupy's On" which featured popular jazz musicians from Detroit and elsewhere. Coleman Hawkins, Louis Armstrong, Duke Ellington, Billie Holiday, Charlie Parker, and Stan Getz were among the artists who appeared on the show. The great Miles Davis made a record six appearances. In 1961, ABC dropped the show from the network but it continued as a local program until January 1962. The show briefly went back on the ABC network as a late night fill-in for the Steve Allen Show in 1962 but was canceled after three months. This did not detour the man who consistently received a pie in the face. In 1964, the show found a new weekday home at WNEW-TV in New York City. This version was seen locally until September 1966, and 260 episodes were syndicated by Screen Gems to local stations outside the New York market during the 1965–1966 season. It was during this run of the show that Soupy ended his live broadcast of New Year's Day, 1965, by encouraging his young viewers to tiptoe into their still-sleeping parents' bedrooms and remove those "funny green pieces of paper with pictures of U.S. Presidents" from their pants and pocketbooks. "Put them in an envelope and mail them to me", Soupy instructed the children. "And I'll send you a postcard from Puerto Rico!" Several days later, a chagrined Soupy announced that money was unexpectedly being received in the mail. He explained that he had been joking and announced that the contributions would be donated to charity.
In addition to the pie throwing and puppet characters, the show featured guest appearances by stars such as Frank Sinatra, Tony Curtis, Jerry Lewis, Judy Garland and Sammy Davis, Jr., as well as musical groups like the Shangri-Las and The Supremes.
It was Sinatra who signed Sales to a recording contract on his Reprise label. Two albums were produced ; "The Soupy Sales Show" in 1961 and "Up In The Air" in 1962. While I am still on the lookout for "Up In The Air", I love "The Soupy Sales Show" and was able to grab an excellent copy a few years back. Here it is for you now. Enjoy! 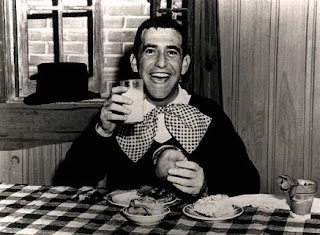