The 25 Posts of Christmas: A Byrd In The Hand 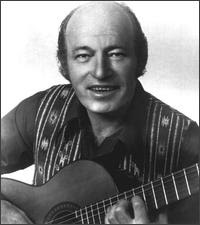 One of my utmost favorite albums that were in the stack of Christmas records that my dad brought out every year was an album of Christmas Carols played on solo acoustic guitar. The guitar player was Charlie Byrd. Charlie was most famous for the collaboration he did with Stan Getz on the famous 1962 album Jazz Samba. The recording pushed bossa nova into the mainstream of popular music. In 1967, he released his now infamous Christmas record. The production on the album is amazing and the guitar actually sounds like it is right next to you. The album was released on CD a few years back but I am sharing the original vinyl version with you today. A word of warning: this album has not aged well. While most of the records I inherited from my father are in good to excellent condition, this one is not. However, the pops and crackles add a bit of ambiance to the feel of the record. If you are looking for a pristine sounding version of this album, I suggest you head to Amazon and purchase the CD release. Otherwise, please enjoy this well loved copy of Charlie Byrd's "Christmas Carols For Solo Guitar".

Charlie Byrd-Christmas Carols For Solo Guitar
Posted by Dartman at 12:18 AM