Come On Get Unreleased Songs 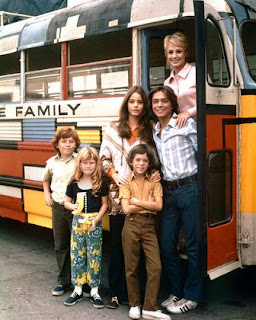 Today I offer a Partridge Family bootleg. What's that you ask, a Partridge Family Bootleg?!?!? Yes. I have no idea where I got this but I've had it for some time. At least ten years. It was a CDR that a friend of mine sent me back in the day when recordable CDs were the new novelty. It has no official name so I have always referred to it as "The Partridge Family Bootleg". It is pretty much a collection of songs that were on the TV show but never released. There are no track titles but you can figure out what songs are what by listening to it. For example, I know the first track is a cover of the old Everly Brothers hit, "Crying in the Rain" (written by Carole King). Anyway, it is pretty cool and I hope you like it as much as I do. Enjoy!

The Partridge Family Bootleg
Posted by Dartman at 4:02 PM

I just tried it and it works fine. Try it again.

Permission denied for me as well. Do we need to sign up for an account with the file hosting service?

I also just tried to download this and I also get the 'Permission Denied.' but this time it is telling me that it was blocked because a David Cassidy that was in the album can be bought in Amazon.

This is happening alot with MediaFire lately.

You might have to re-up this to another service because MF will trigger the file if re-upped to MF.

Nope... tried about 10 times now and each time I get the same "Permission denied" message. Alas...

Sorry Dartman but I got the same thing.
"Permission Denied."

just re-upped it. try it now

OK. Changed servers this time. See if it works now.

Does it have "Snakes Theme"? I can't wait to get this, thanks for the post.

Ah... got it that time! Thanks Dartman!!

Bless you, this is awesome. I am not a follower of your podcasts but I do like the other stuff you share. Thank you very much.

Thank you for all the good things you make.